Shallow Permian Petrophysical logs – putting it all together!

From the previous posts we were manipulating log data to contrast different zones in shallow permian stratigraphy.

We can now attempt to interpret the different zones and how this changes at each depth.

Beginning with the gamma and density signal, a coal seam is present at 252 to 254 m while at ~282 m there is a carbonaceous horizon of coaly shale. At 270 .4 m there is a slight dip in gamma with a small spike in density. 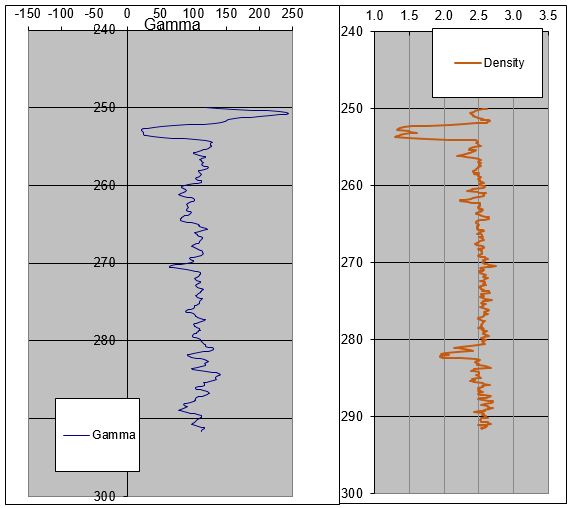 However, there is a marked contrast in resistivity logs where three distinct depth zones can be seen:

– A zone from 254 to 270 m showing a gap between the borehole wall resistivity and the deeper formation resistivities, possibly a "water zone"

– A zone below 270 m where there is almost no gap between the values of the micro- shallow and deep resistivity log readings.

This infers  a change of overall porosity and / or formation water at the 270 m depth.

The initial small pore pressure spike at 270.4 m could be representative of a structuralyinduced pressure cap at the contact between two hydro-geologic zones.

At this 270.4 m pressure spike, taking  the negative gamma and neutron spikes, the slight spike in resistivity can often be taken to infer a potential zone of partial gas saturation, as shown below. 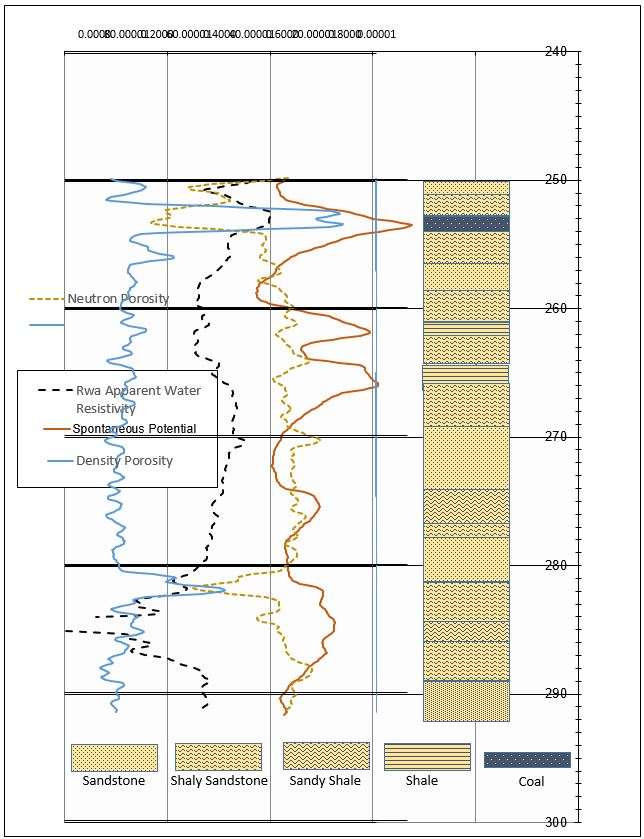 If one dismisses the change in Rwa being attributable to a change in formation water salinity then the alternative scenario is that the water saturation is less than 100%. Note that gas saturation is ; Sg = 1- Sw

hence our water saturation is;

Realistically we have to also ponder the possibility that the water salinity could be the same all the way down to 279 m. If we then consider the lower Rwa of the lower zone from 274 m to 279 m at 0.13 ohm m. In this scenario and adjusting the equation to replace the Rwa with 0.13 ohm m value then the water saturation drops further to 55%, and our gas saturation is correspondingly higher at 45%.

It is more realistic to input an averaged Rwa value which will change the apparent gas saturation to a value which is intermediate between 11% and 45%.

Finally one must assume that there could be no gas saturation without a low porosity, clay cap so it appears that a low porosity horizon must be present, the only question being, how much, if any gas is present?

Note that minor gas occurences can occur in many sedimentary settings and particularly in the vicinity of coal seams and that possibility cannot be discounted.

Also If one takes all of the logs and the resistivity logs it does strongly suggest that different water salinity zones are present.

The take home lesson here is that the most important phase of the interpretation is resolving the correct parameters to try to reduce the number of alternative scenarios. This can be done by analysing more types of log data, actual samples and cores and conducting drill stem tests for gas and permeability in the zone of interest.

I would appreciate any feedback.

I am now going to move to new data sets to see if I can improve on my application of these interpretative methods.