And now for something completely different – Skarn Notes

I recently had cause to work on a mineralized skarn prospect. Here are my generalized notes on skarn type mineralization.

A brief description of skarn deposits is included here for the benefit of those who are unfamiliar with this type of mineralization. It is based on a paper by Webster and Ray, 1991.

Skarn type mineral deposits can be economic sources of gold, molybdenite, copper, silver and a number of other elements and represent an alternative resource type to the more frequently encountered vein and stockwork hosted, hydrothermal ores.

Skarn is a coarse grained calcium or magnesium silicate alteration formed at relatively high temperatures by the replacement of the original, usually carbonate rich rocks. Skarns are often rich in Fe, Al, Mn and other metallic elements. There are several types of skarn and skarn formation models, as well as different types of skarn zonation relative to the magmatic heat source. In brief the two chief modes are:

·         Reaction skarn which is formed by localized metasomatic reactions between two reactive lithologies.

·         Infiltration skarn which is metasomatically formed by the infiltration of hydrothermal fluids.

There are distinct zones of alteration within an infiltration skarn occurrence. These zones, determined by zonation within the garnet bearing, retrograde skarn zone are associated with concentrations at ore levels.

It is exoskarn that is the site of most known ore occurrences, and the distribution of the most concentrated ores are thought to be proximal to epithermal fluids flowing along faults, fractures and beddings planes.

The process of concentration of metals into ores only occurs after the alteration of calcic rocks to skarn is largely complete. Formation of the original skarn is followed by a process of retrograde alteration where cooling and epithermal fluid flows will cause new minerals to form by the recrystallization of part the skarn. This is thought to occur mainly in the garnet – pyroxene (proximal) skarn zone. It is within this smaller volume of retrograde alteration in which yet smaller lobes of concentrated ores can form. The model of skarn formation thus means that the distribution of ore within skarn zones is discontinuous leading to difficulties in the delineation of reserves. 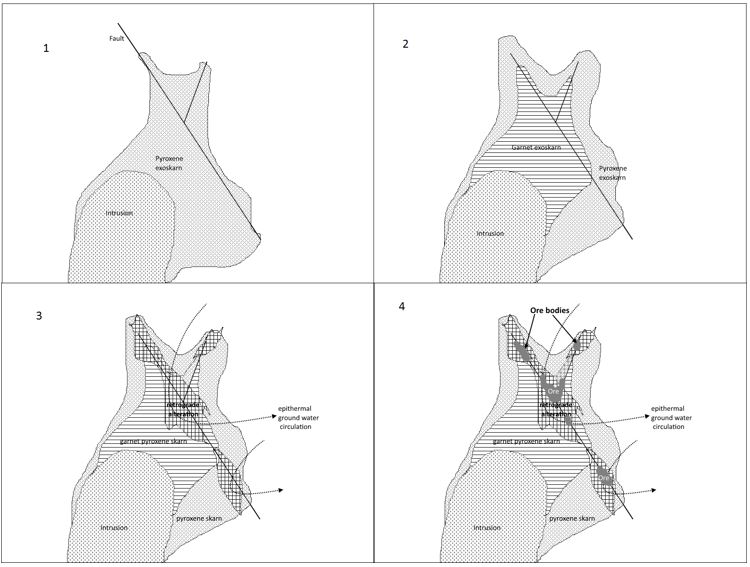 Image: Skarn ore formation diagram drawn by me but modified after Ray and Webster 1991.

Minerals that are associated with limestone (calcic) exoskarn are garnet, clinopyroxene, and wollastonite and the magnesium (dolomitic) skarns also can also contain olivine, serpentinite and orthopyroxene while the retrograde alteration zones will contain amphibole, chlorite and epidote and if magnesium rich, amphibole, talc and serpentinite. Pyrite and magnetite are common in both types.

There is a strong association between gold and copper skarns and sulphide minerals such as chalcopyrite, pyrrhotite, pyrite and bornite as well as arsenopyrite.