For most gas field, key geological variables play an active role in well flow performance and are key to well flow calculations. This is my attempt to explain the implications for well flows caused by differences in reservoir types. Reservoirs can be categorised into unconventional and conventional types. Initial flow calculations are derived from a simplified capillary model for slightly compressible (i.e. non-gas) liquids which have then been subsequently derived to apply to gas flows. These models stem from capillary models which are analogous to flow pathways within the formation, be it via fractures and/or pore throats are represented by capillaries. The basic derivation (leaving out a few steps – for brevity) of this calculation can be reduced to the Darcy flow expression;

Where: q = flow rate (units/time), k = permeability, itself a measure of volume flow through a medium over time. Area A = the cross sectional area of the porous medium being drained, µ = fluid viscosity, ∆P = pressure difference along the flow path and L = the length of flow path. 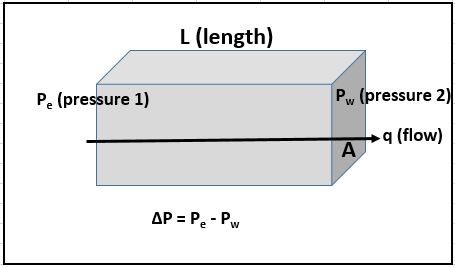 In the figure above I used the Pe and Pw terms for simplicity and they appear in the next equation although the ∆P is used in the original equation.

To understand this in geological terms, permeability, pressure and fluid viscosity are the critical geological influences with area and length being determined by not only reservoir geometry but by well spacing as well. Note that the equation does not include reservoir fluid volumes, this parameter being effectively represented by Area and Length (volume) and Pressure.

This simplified model leads to most commonly used expression in well field flow modelling, (again leaving out a lot of derivation steps, for brevity), which is the radial slightly-compressible fluid flow expression where flow q, for a single well is given by; 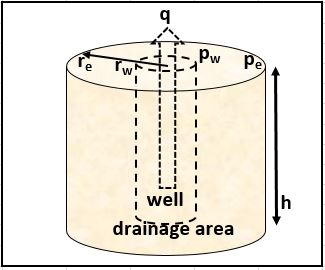 This equation is very similar to the simplified darcy equation, we introduce 2π and h to represent area A while (Pe – Pw) represents ∆P. The e and w subscripts represent the pressure condition at the extent of the drainage area and at the wellbore wall, respectively. The previous variable L is now represented by the natural log of the radius of the drainage volume around each well. This last variable uses the terms; re = radius at the extent of the drainage volume from the centre of the well, and lastly, rw = radius of the wellbore from its centre (typically a radius of 2 to 6 inches, or 5 to 15cm for a gas well).

There is one term which so far I have not explained and that is the k = permeability variable.

Permeability is an intrinsic property of a porous medium and describe the ease of which fluids will flow through that medium. This property, k, is generally defined in darcy terms under the expression;

This expression, also known as Darcy’s Law, shows that permeability increases proportionally with flow. From a geological perspective it might be simpler to look at an alternative wellfield expression which is derived from solving simultaneously the Darcy’s Law and the Poiseuille capillary flow model equations;

Where R = radius of pore throats in the rock matrix, simplified as the average capillary radius and a new term, ø which stands for porosity. This is simply described as;

and is expressed either as a decimal value between 0 and 1, or in percentage terms. I include this last equation to show the relationship between grain size, in the case of a sandstone or siltstone reservoir and permeability. The relationship between R and grain size, and hence permeability can be visualised as being something like the following figure; 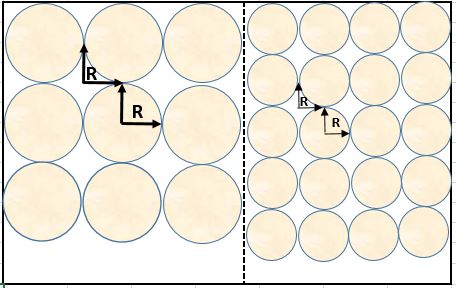 This fundamental difference between highly permeable conventional reservoirs, be they sandstone or carbonates (reefal limestone and/or fractured dolomites) against unconventional shales and coal reservoirs has all sort of implications for wellfield design and engineering, including well spacing, flows per well and stimulation requirements.

There is a further complication being the Klinkenberg Effect, where gas permeability drops under increases in pressure due to the increased gas molecule friction against pore and fracture walls, however it shouldn’t change the overall explanation.

Returning to the radial flow model, but with additional terms for changes in gas volume under reservoir pressures Bg and wellbore skin factor “s” (factor accounting for damage to permeability caused by drilling). There is also a further factor to account for turbulent flow (non-darcy flow) however at pressures above 3,000psi this is set to zero.

Below 3,000psi, a simplified gas flow equation which uses a pressure squared approximation model can be applied. It looks like this;

Where the sub-script “sc” stands for “surface conditions” and new term T = temperature and z = compressibility. A further term, D is introduced to account for non-Darcy, or turbulent flow.

This simplified formula is often applied to shallow reservoirs.

In both low and high pressure cases the critical factors which dominate the well flow equations are the terms k for permeability, h for producing zone exposure and skin factor, s. Note that flows can be increased with a negative skin factor. This is generally achieved via fracture stimulation in horizontal well. The fractures also assist permeability while a long horizontal section increases the parameter h. In this case, horizontal fracture stimulation will affect both the top and bottom lines of the equation to increase flows at the surface.

For conventional reservoirs, k, permeability can be high however higher initial pressures mean that the parameter (pe-pw) needs to be controlled for maximum recovery.

Conventional reservoirs, particularly large fields also have high lateral pressure communication. This means that the drainage radius re can be very high and this can limit well flow rates.

In unconventional reservoirs, the size of the drainage radius re is constrained by induced fracture length. In coal seam gas fields, it is constrained by the length of effective face cleat connectivity which pre-exists development, or alternatively develops over time via matrix shrinkage.

I have deliberately left out a host of very complex variations in both lateral and vertical permeability as these are too complex for the radial flow equations, although they almost certainly influence all well flows and performance. In broad terms, permeable reservoirs enjoy a high degree of lateral pressure communication between wells while tight reservoir wells generally have limited or nil well to well interference effects.

We can now see that in all cases that wellhead flows are proportional to the parameters of permeability, k (explained above), the length of well exposed to the pay zone, 2πh, and the size of the pressure differential, (pe-pw) between the wellbore and the reservoir, which can also be explained in terms of “net drive”. Working against the flow rate, q are the parameters of fluid viscosity and distance from the outer reservoir zone to the producing face at the wellbore, gas compressibility and turbulent flow factors.

Conventional gas wells tend to be deeper, due to various factors including the often higher thermal maturity settings for a gas accumulation. Depths greater than 3,024m (10,000ft) are normal and correspond to pressures of 4,700psi or more. This generally corresponds to very high flowing well pressures.


Unconventional gas fields can occur at any depth, with many operators targeting lower cost shallow shales and coals. Typical pressure for a coal seam gas well might be around 650psi (pounds per square inch), which will occur at depths of around 457m (metres), or 1,500ft (feet). For a shale gas well, this might be 2,300psi from depths of 1,524m (5,000ft) however in general shale and coal is not influenced by materially balanced, flood front drives such as aquifer pressure. In lieu of volumetric water  replacement of drained hydrocarbons, shales and coal gas flows resemble hydrocarbon escape which is volumetrically balanced by rock matrix shrinkage and possible compaction from lateral or vertical forces. 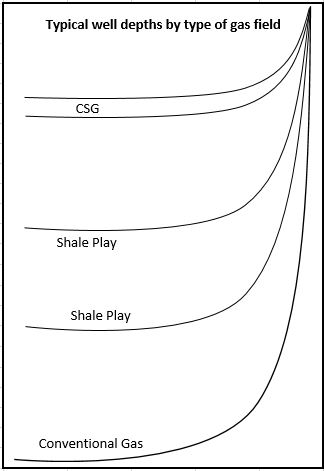 Pressure differentials, meaning the difference between the driving pressure in the formation and the flowing well pressure is harder to characterise and tends to be related to choke settings and engineering requirements. However, the differential pressure (pe – pw) can be assumed to be between 50 and 200psi, typically around 100psi. This parameter is determined by both geological limitations, changes in fluid phases as gas pressure drops and engineering factors and is often artificially enhanced by secondary recovery methods. In crude terms however;