This is a quick look at a bunch of rocks and some notes on making common rock descriptions. You might find it useful as background reading for academic use or to aid identification. It has been done in the style of a quick rock identification exercise. By using physical properties to build up some evidence a systematic approach to rock identification can be made. Of course most of us know what a granite or a sandstone looks like, but how does a geologist actually make that determination? Remember that there has to be a scientific method. In this article I’ve named the rocks after making each set of observations. 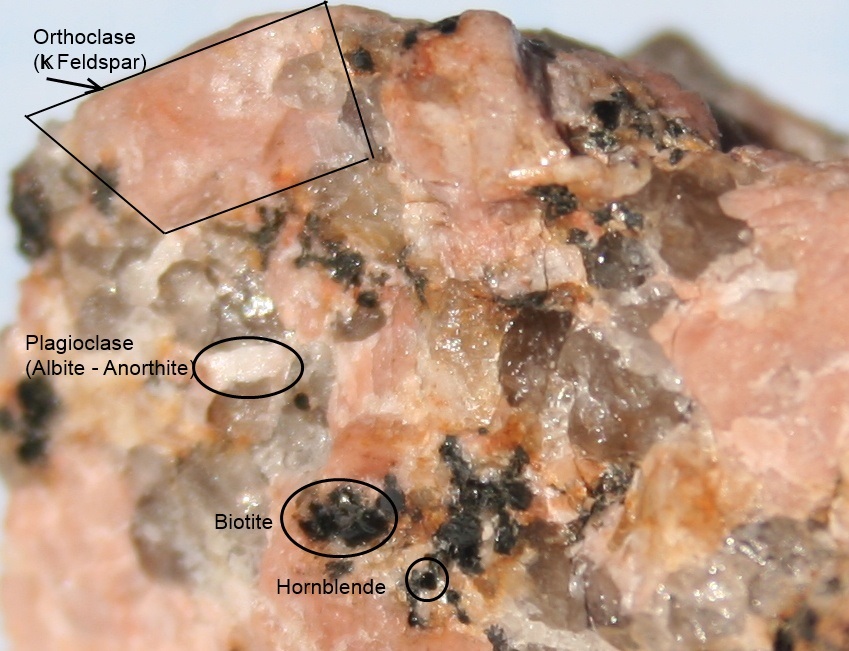 Description of minerals in sample 1:

Granite:Granite is a Felsic coarse grained igneous rock comprised of up to 65% alkali feldspar and at least 20% quartz. Chemically felsic rocks are predominantly made up Silicone Oxide (Quartz) and Aluminium Silicates minerals with a high Sodium or Potassium content. The pink colour is strongly associated wth Potassium.

Very small,  white crystals which are visible might be formed from a late release of volatile fluids.

Basalt is an igneous, plutonic intrusive flow into country rock and forms as a dyke or a laterally extensive sill. The magma source generally has a mantle component and has a higher temperature, and is less silicic that granite.

It also forms from surface eruptions of lava as a volcanic flow if terrestrial, or a pillow basalt if flowing into a sub-marine setting.

Whether plutonic or volcanic, it’s properties are characterized by rapid cooling and a iron/magnesium rich melt source. 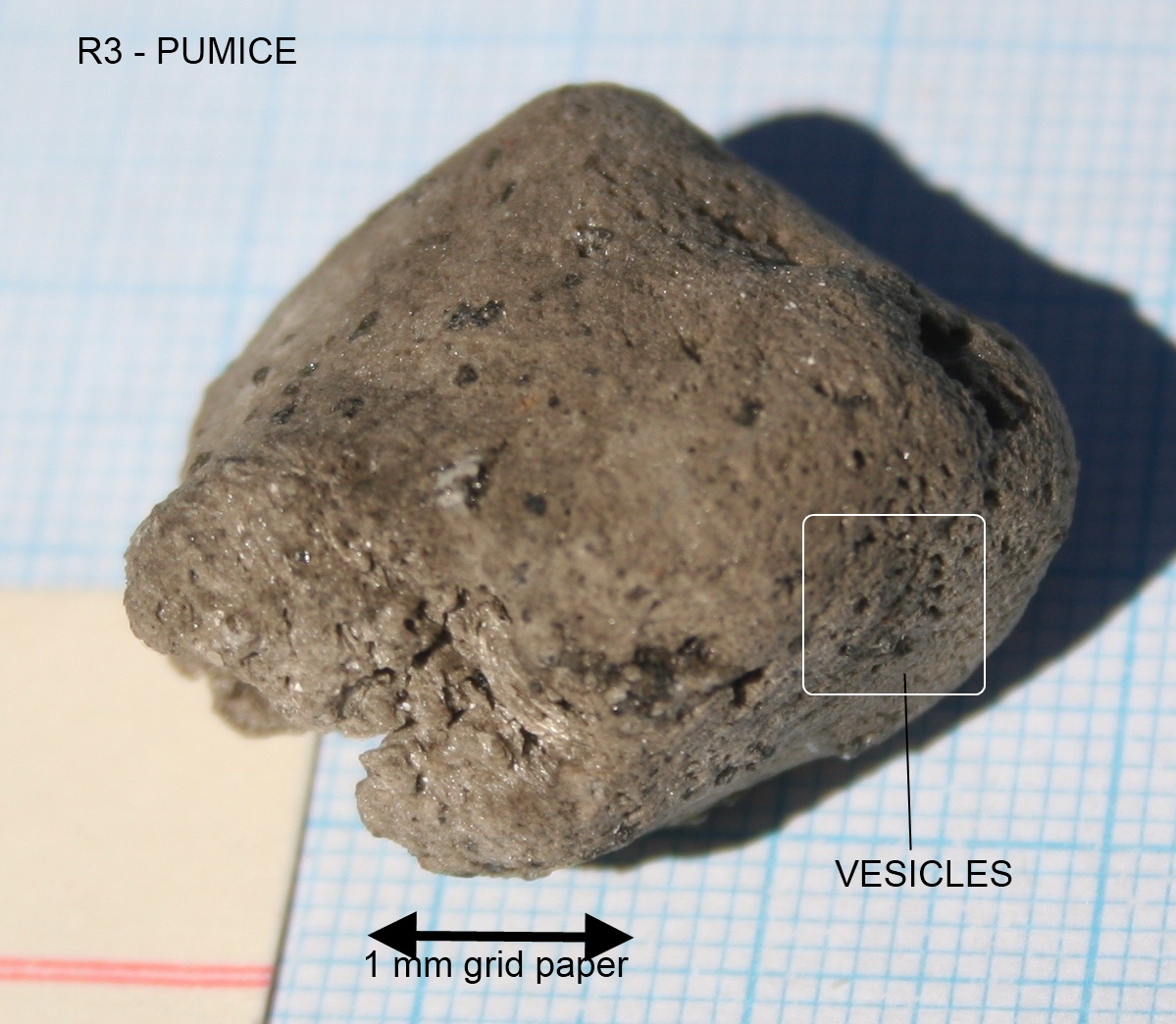 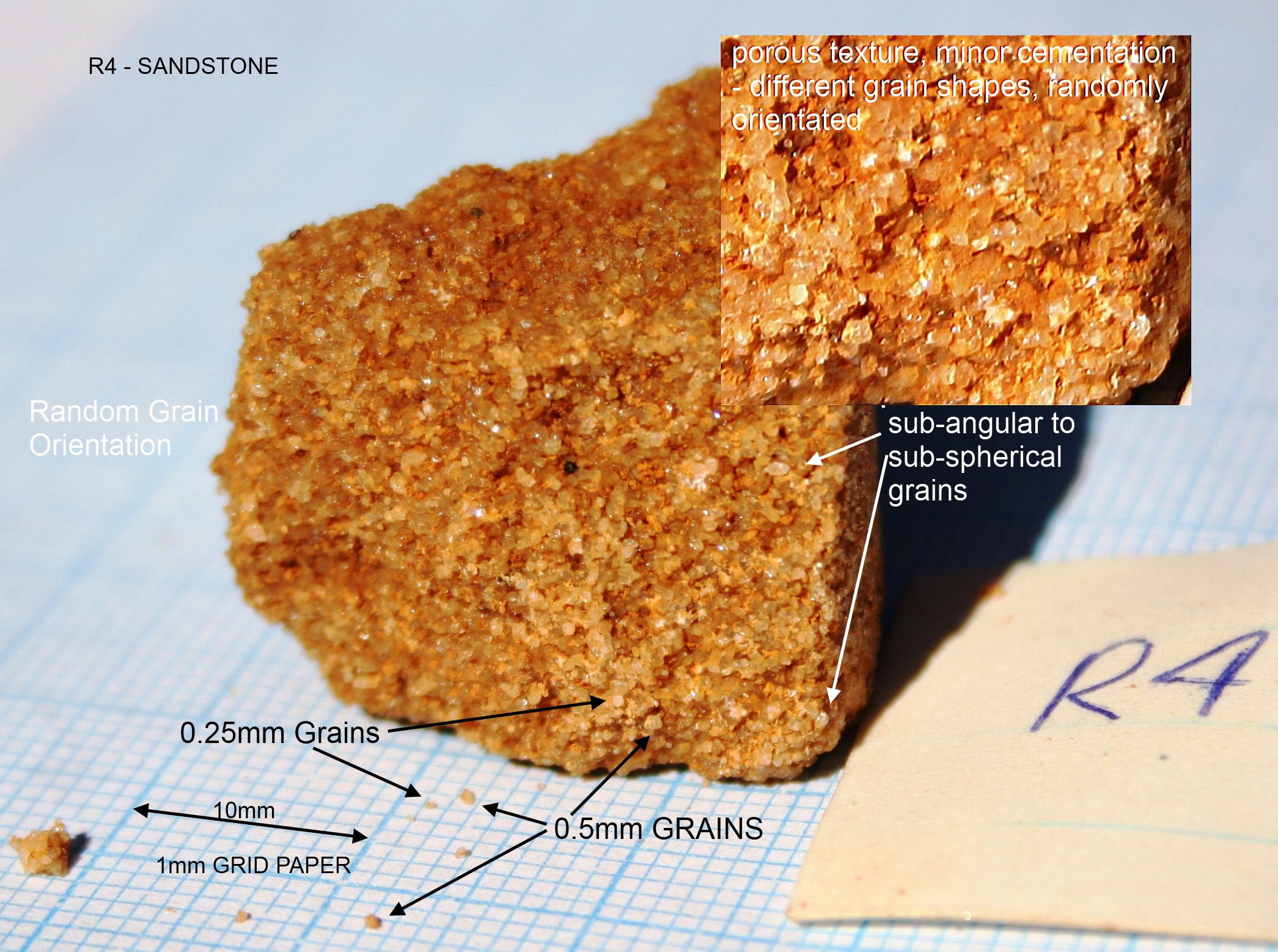 The size fraction as shown in figure above is of grains in the 1/4mm to 1/2mm size.

This is a medium sandstone. Sandstones are defined as sedimentary rocks made up of discreet grains in the 0.0625 to 2.0000 mm size range. 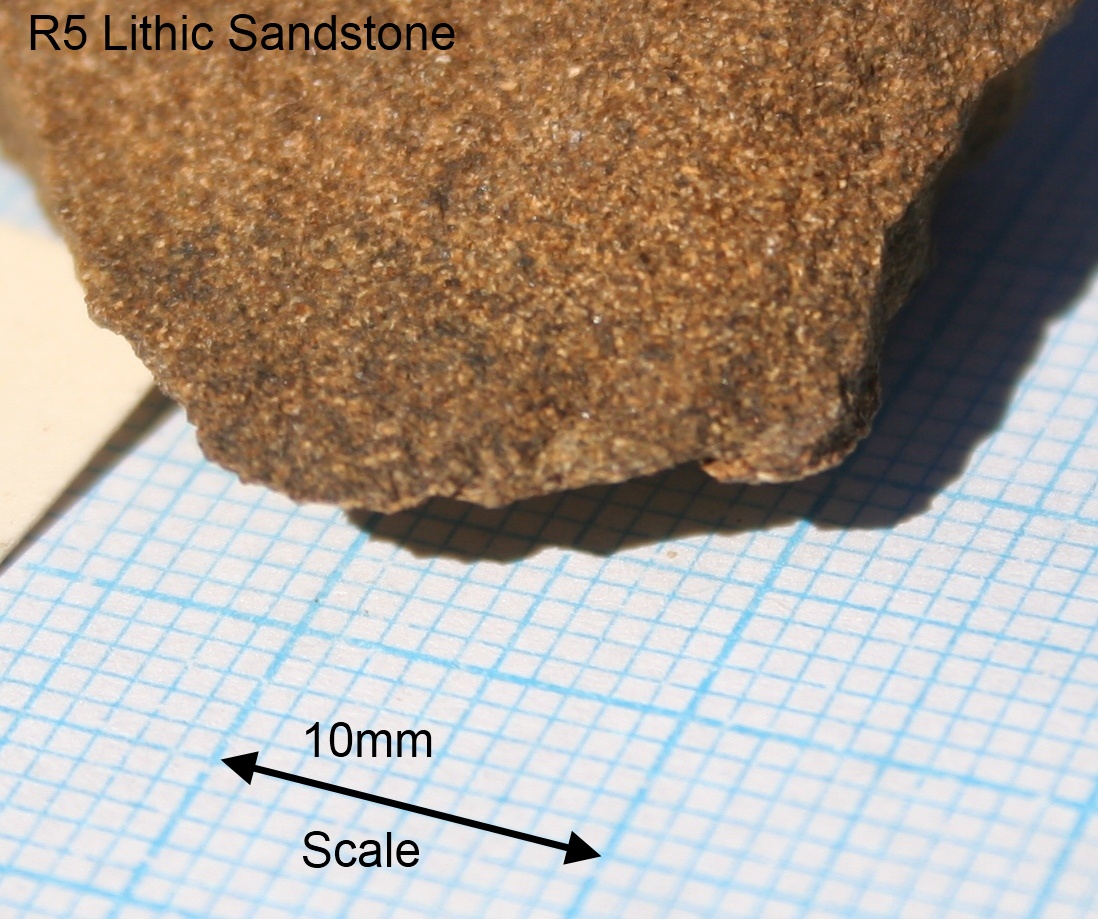 Common rock Description; Hard, medium density, fine sand grained brown groundmass of grains described as polymitic or of diverse mineralogy. Observation with a hand lens shows that each individual grain is itself be composed of diverse minerals.

Lithic Sandstone; Lithic Sandstone is composed of grains which are themselves composed of a number of smaller, diverse mineral types.This is because the individual grains did not have time to break down into clays and silt as they have been deposited a relatively short distance from the source. We call these grains “lithic” because the are in fact rock fragments. This is in contrast to clastic sandstones where each grain is comprised of a single mineral grain, usually made of chemically resistant, physically strong minerals such as quartz. Because of the presence of clay forming minerals lithic sandstones tend to have a poor porosity. 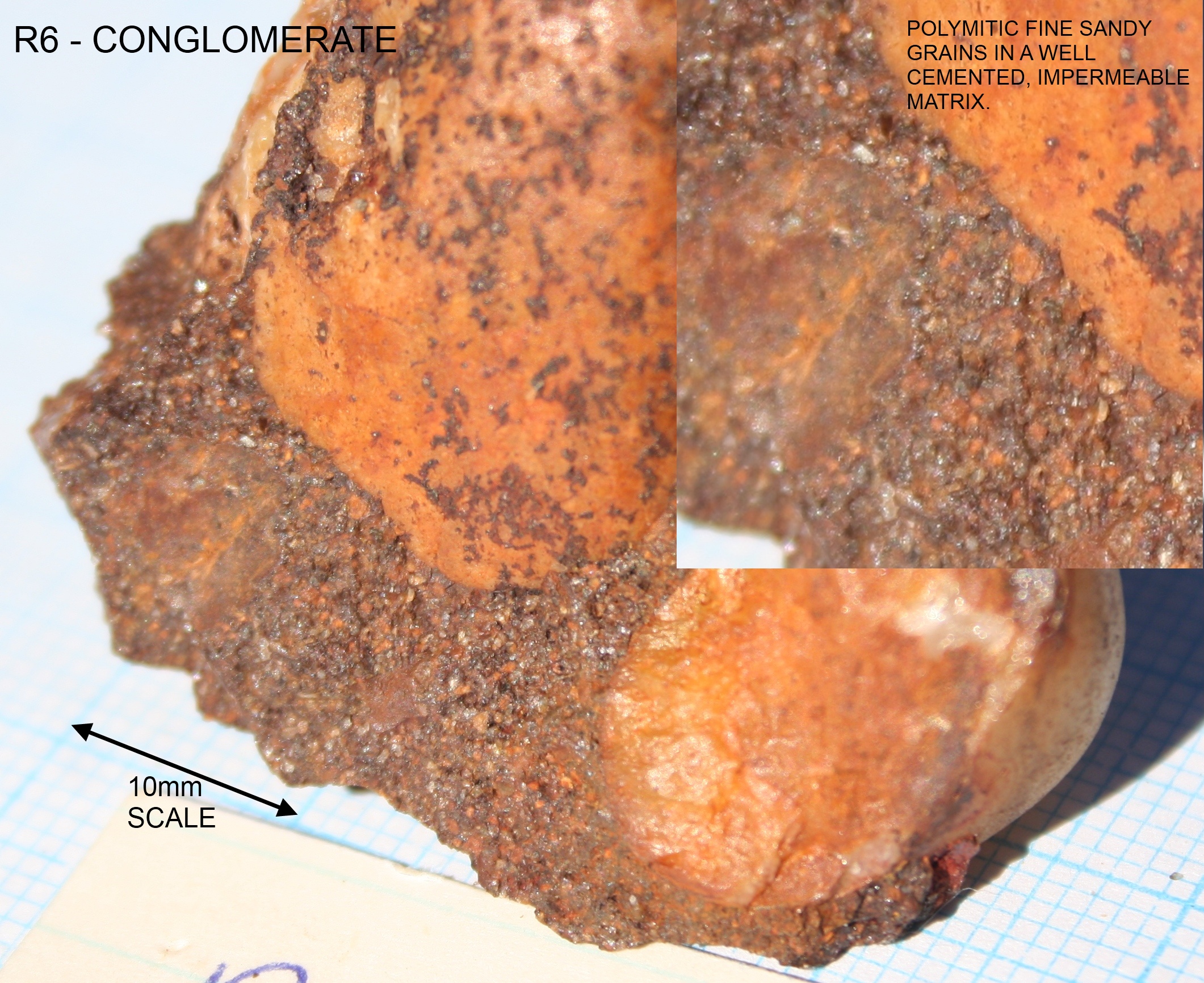 Conglomerates are a product of high water energy stream deposits where well rounded river pebbles are covered in finer sediments.. Today this depositional process can be observed in braided rivers and mountain streams. 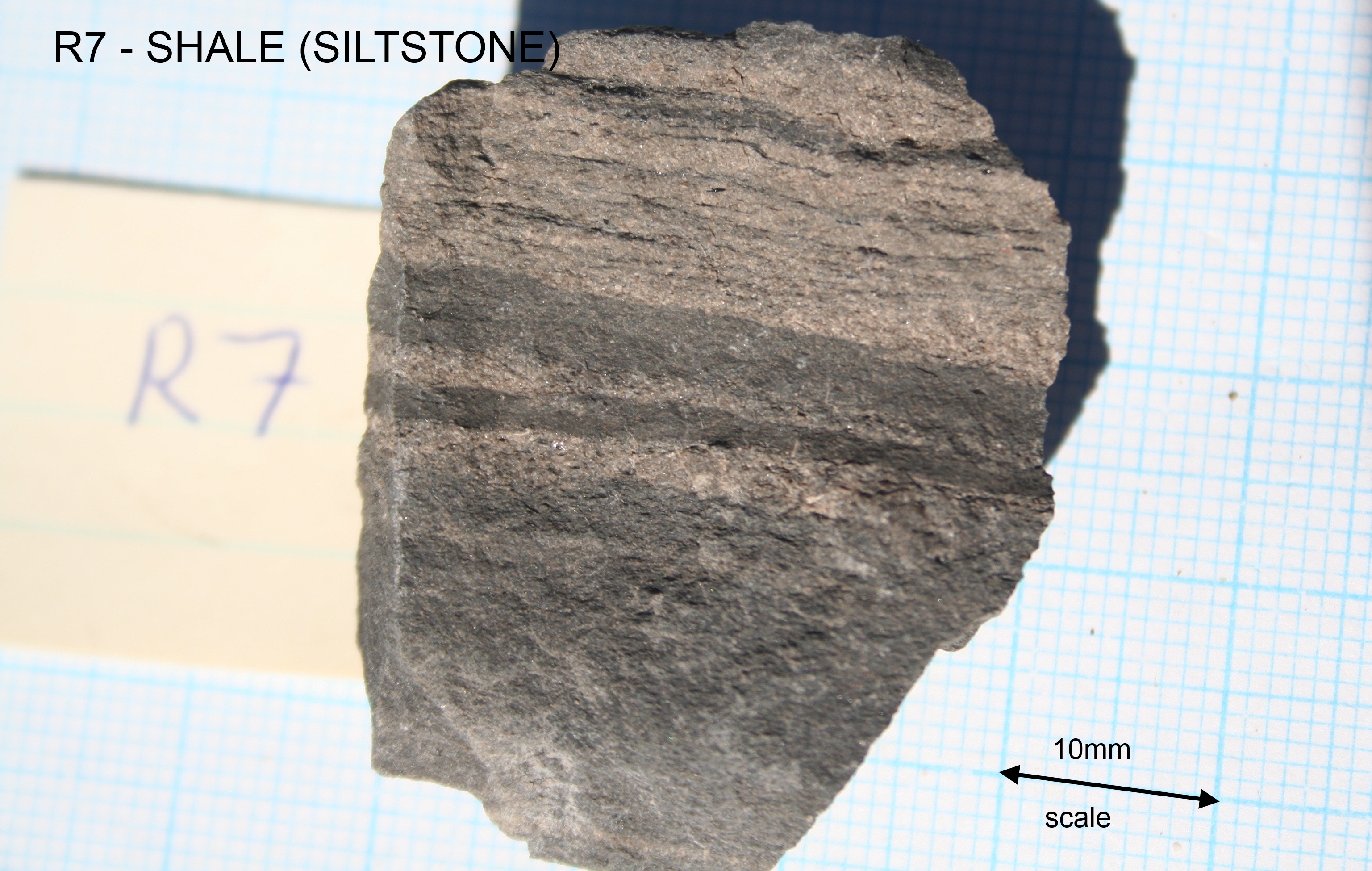 Shale is the term for sedimentary rocks that are finer than sandstone and which contain a high clay content. While some geologists prefer to separate the description out into siltstone and claystone, shale nevertheless is formed by the deposition of very fine sediments. The depositonal environment could be a tidal flat or the lower marine continental shelf, a flood plain, a river mouth, a lake bed, a lower delta plain or any deposit of finer sediments that were carried further from their source than sand grains. 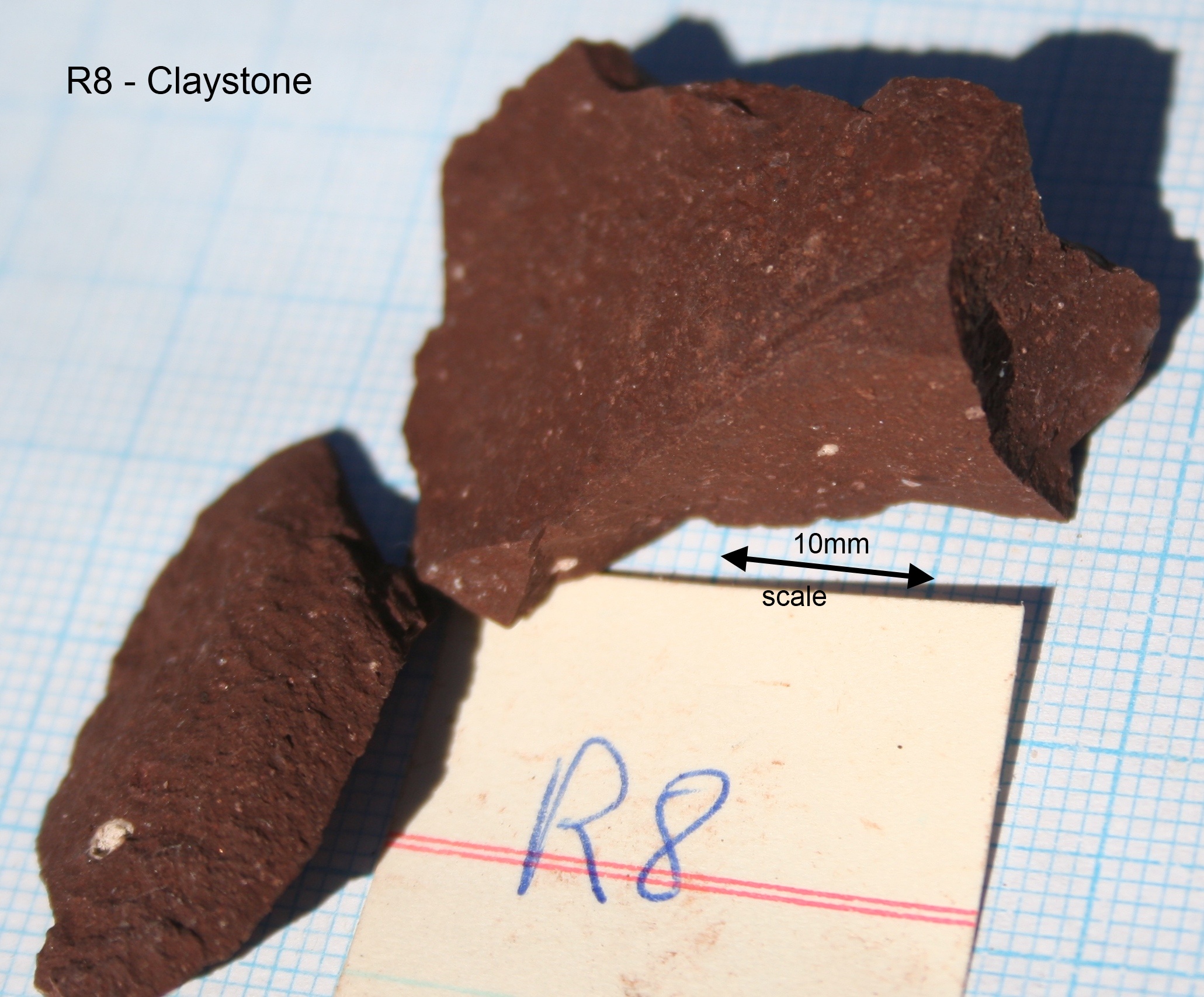 Clay is deposited in a number of ways. This claystone may have been formed as a result of deposition of clays on the sea floor or in a lake bed, a scenario which is supported by the presence of other grains.  Some of the other transport models are dust storms, flooding events and volcanic eruption outfalls. Geologically speaking volcanic clays are interesting because they allow isotopic dating of the horizon to be made and hence are usefull for dating sedimentary successions.In this case a closer look at the other minerals and a paleontological analysis (looking for any sign of fossils) would need to be made to confirm the depositional environment. 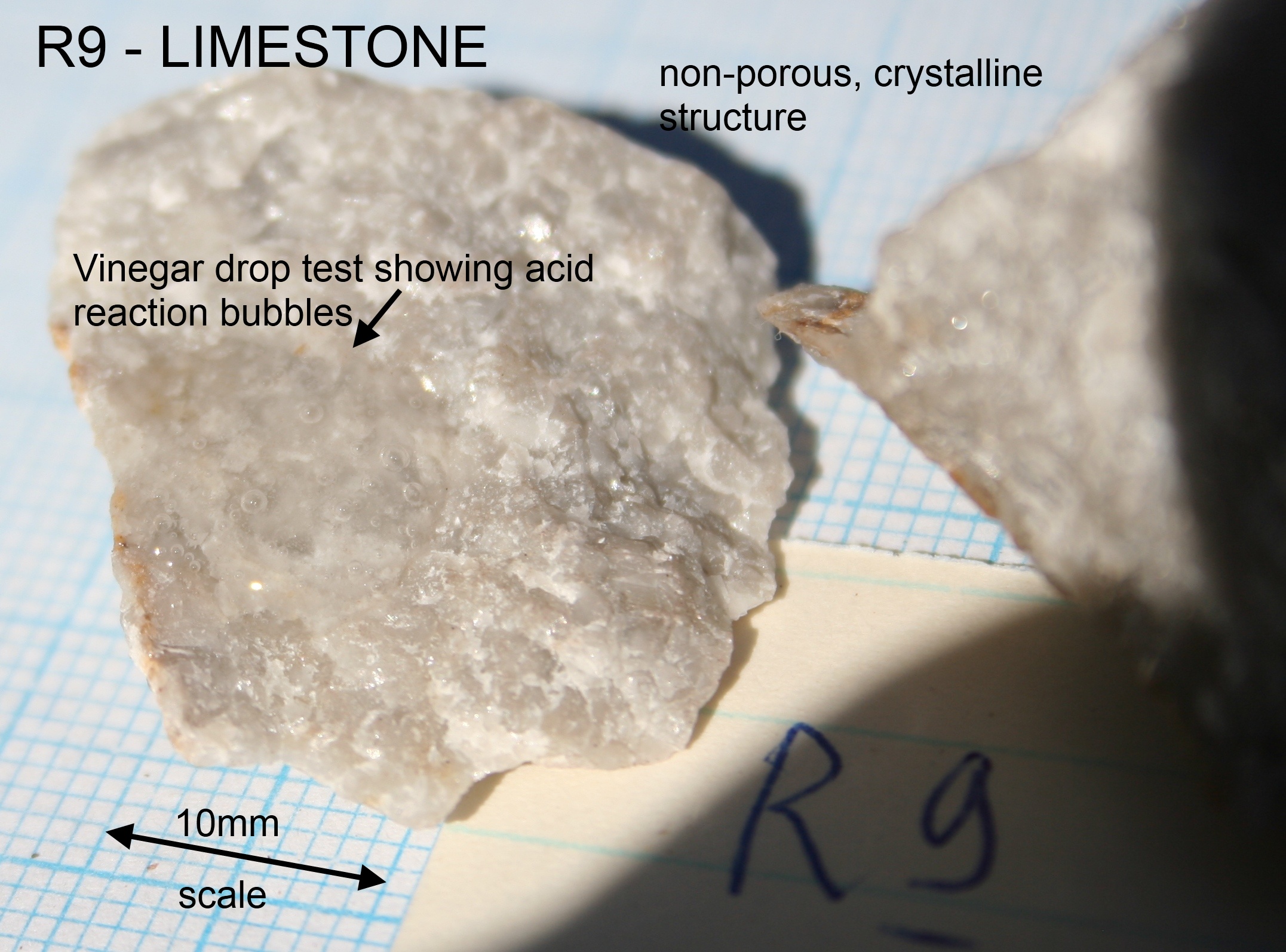 White, medium strength rock showing evidence of crystallized fusing of grains. It has a coarse surface, and irregular fracture. It is of medium density.

Limestone is formed in a marine environment from the accumulation of calcium carbonate. Calcium Carbonate is either accumulated throught the growth of a coral reef, or in deeper waters from the depostion of the skeletal remains of plankton. 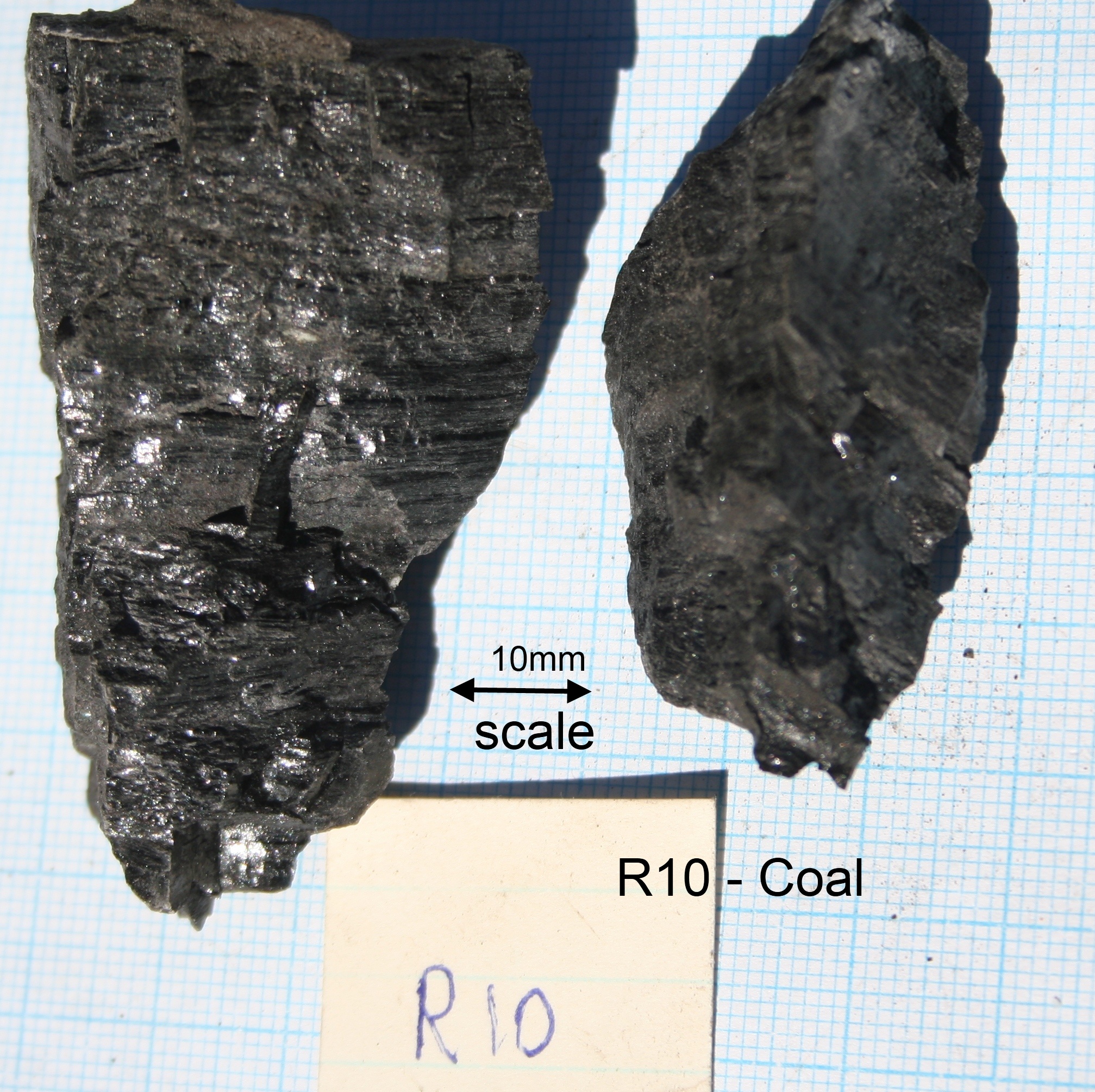 The bright and dull bands in the rock represent different types of Macerals. Macerals are the coal equivalent of petro-facies and is term that describes the original vegetation that was deposited, and then diagenetically turned into coal.

The permeable character of a coal seam is therefore not measured by the connectivity of its pores, but is determined by its cleat spacing and aperture.

Coal is a rock type about which whole books are written due to the complexities with understanding its many properties.In broad terms, coal is characterized according to the type of organic matter and its maturity, or rank. However it does defy being “shoe-horned” into a single classification system and so is generally classified according to the needs of the reader. For example it might be initially described and classified by the field geologist according to its colour as determined by streak, density and the type and occurence of lustrous vitreous or dull sections which make up a seam. Structurally it possesses a crypto-porosity which is difficult to study, even in the lab, however cleating is macroscopically observable.

A rundown on coal is being prepared in a separate article. Below are some simple field observations and notes and my apologies for its simplicity.

This concludes my first post about common rock descriptions. I promise better is to come so please keep an eye out for further posts.